What are the health benefits of drinking coffee?

What are the health benefits of drinking coffee?

Before we dive into what the health benefits of drinking coffee are, we are not claiming to be experts in the remedies of coffee. However, over the years of research which we’ve come across, there are some key findings which we think will help you understand what health benefits coffee has. We stumbled across this brilliant infographic which outlines 85 health benefits of coffee if you’re pushed for time but want a quick insight.

Whenever we have conversations with people about coffee, the conversation usually ends or contains somewhere in it ‘too much isn’t good, is it? I should probably cut caffeine out, shouldn’t I?’. Let’s see what the research concludes, as you might be pleasantly surprised.

When presented with articles by the media about coffee and health risks or benefits, they usually portray coffee to be something which is bad for you or doesn’t provide any health benefit at all. This is where the misconception has come from.

Let’s take a closer look at some research and see what the facts say about coffee and health benefits.

Now the disclaimer is out of the way…

Now that we’ve established that we’re not doctors, let’s dive into some of the research we’ve found. According to the charity diabetes.co.uk, coffee can help lower the risks of type 2 diabetes, cancer such as endometrial cancer and aggressive prostate cancer, cardiovascular disease, strokes, Alzheimer’s disease and Parkinson’s disease.

Reading this alone, it looks as if coffee is something we should never miss out on. But more specifically, why and how does coffee help with certain health ailments? To start with, coffee contains molecules which are called polyphenols. Polyphenols have anti-oxidant properties which are believed to help reduce inflammatory illnesses, such as the ones outlined above, more specifically type 2 diabetes is considered to be an inflammatory illness.

Polyphenol isn’t the only property which coffee contains, it also contains the mineral magnesium and chromium. The greater the intake of magnesium, the lower the rates of having type 2 diabetes is, according to diabetes.co.uk.

This blend of nutrients can be helpful for improving insulin sensitivity, which may help to offset the opposite effects of caffeine.

People, when talking about coffee and how it may help with health problems, will often say that one or two cups a day will be just about right, but anything more is too much. However, people with type 2 diabetes who have regular high caffeine consumption over a 4 week period have been seen to impair insulin sensitivity.

Although researchers concluded that there is a relationship between coffee consumption and lower sensitivity to insulin, they also acknowledge that an aggressively rapid transition to having more coffee might have produced an atypical or emphasised response to the body.

We mentioned that coffee can help with reducing the risk of Alzheimer’s disease, but what exactly is it and how does coffee help? Alzheimer’s disease is one of the most common types of dementia among the older population. In fact, between 2-10% of Americans and Europeans over the age of 65 years old are affected by the disease. The disease is the decline in cognition, daily functioning and behavioural alterations including loss of short-term memory., language impairment and disorientation (Santos et al. 2010; Alloul and others 1998). In the brain, this has been linked to extracellular plaques containing β-amyloid peptides and neurofibrillary tangles by abnormally broken-up proteins (Arendash and Chuanhai 2010). A lot of research has been undertaken around this topic and suggests that drinking coffee to consume caffeine produces a lower risk of or lessens the progression of Alzheimer’s disease (Barranco Quintana and others 2007). According to this research, caffeine is shown to reduce peptides in the brain, and this is the mechanism believed to be casual to this relationship (Arendash and Chuanhai 2010; Arendash and others 2009; Tabaton 2009; Qosa and others 2012; Cao and others 2009; Cao and others 2011; Cao et al. 2012). There are however other theories as to the specific mechanisms, such as an increased cerebral blood flow, which need to be further investigated (Audenaert and others 2011).

Parkinson’s is another disease which we mentioned earlier on in this article. A large number of researchers have studied closely the affects that coffee has on Parkinson’s disease. They have reported a contrasting relationship between coffee and caffeine ingestion and risk of Parkinson’s disease development (Higdon and Frei 2006; James 2011; Costa and others 2010; Hernán and others 2002). Around 3% of people aged over 65 are affected by Parkinson’s in the US alone and worryingly, this number is predicted to grow. Parkinson’s disease is caused by the degeneration in certain cells of the brain stem, which causes a continuous loss of dopamine and creates debilitating physical motor disturbance symptoms (Costa et al, 2010). Some studies have noted a dose-dependent effect, where a higher coffee consumption results in a stronger preventative effect (Ross et al. 2000). Some hypothesize the mechanism may be related to caffeine blocking the adenosine receptors, which increases motor activity (Fenu and Morelli 1998; Chen and others 2001). However, this area is in need of more research.

Over the years there has been an incredible amount of research taken place to determine the effects on mental performance when drinking coffee. It has been found that caffeine blocks adenosine. Adenosine is a naturally occurring purine nucleoside, blocking this wards off any tired sensation and can result in increased attention or cognitive performance. The additional effect that caffeine has on mental performance is that it’s known to elevate the mood of coffee drinkers although some people believe this is a result of alleviation of withdrawal symptoms.

It’s important to remember that none of the research which has been carried out on the health effects of coffee is specifically from ‘specialty coffee‘ or any other specific types of coffee. It is also important to remember that when talking about coffee and the health benefits it has, we’re not suggesting that a social drinker who adds sugar, cream or milk and so on to the cup will benefit from the same effects. When describing coffee as the drink, the studies carried out have focused on a brewed, black cup of coffee with no sugar. If you’d like to know how to properly brew your coffee, we have lots of ‘how to’ guides that can help you.

Studies have shown that coffee does correlate to health benefits. The types of coffee, whether specialty or otherwise, are still yet to be determined. As an industry, it’s important we push researchers in a new direction, one where health professionals are more educated about the specific products they are investigating, so that we can have a clearer understanding. 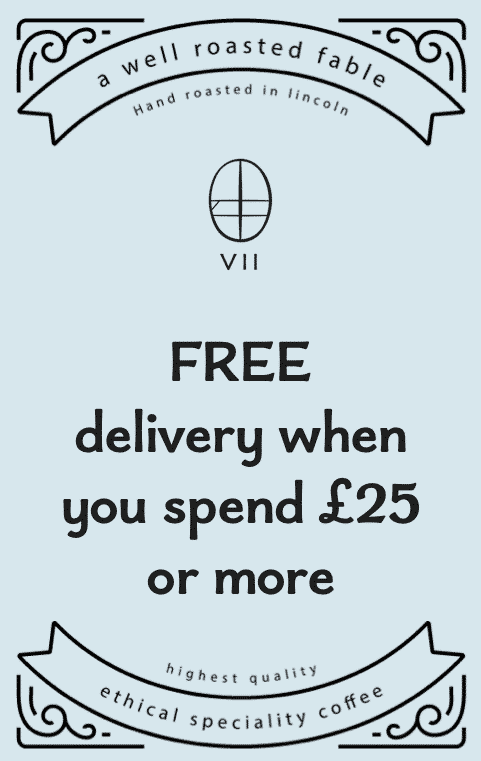 Free delivery when you spend £25 or more